Thanks for taking the time to read this post. My name is Jeremy Blair and I have played the WoW TCG since the beginning. I wanted to ask some clarifying questions about Worlds qualifications. I top 8'd my realms in 2009 but did not top 8 the 2010 realms championship. I attended nats and got 101st place. However, I have never missed a Worlds event (due to past qualification on rating, honor, etc.). My prior finishes were 14th and 56thish at the last two US-based Worlds events.

Does any past ranking or performance contribute toward our current qualification? Does a Top 8 at (since the last Worlds event) qualify us for this event? I want to stay involved with the game and plan on coming to Indy for GenCon. Is there a list of the current invited players? I hope to have an invitation and would love someone from customer service at cryptozoic to explain my options. Thanks so much for your time and consideration.

You may want to read through the 2010 World of Warcraft TCG World Championship Player Packet if you haven't done so already. It can be found at the bottom of the blog here: http://cryptozoic.posterous.com/the-world-championship-schedule-is-here

Day 1 of 2010 WoW TCG World Championship is Thursday, and this is an open event. There are several flights that will occur throughout the day.

If you did not receive a Bye into day 2 from one of the above events, we recommend you attend at least one of the Day 1 events for the 2010 WoW TCG World Championship on Thursday, if you wish to attempt to qualify to participate additional days of this championship event.

In addition, even if you don't make it into day 2, we have a variety of other WoW TCG events planned during the GenCon weekend for players to participate in.
_________________
Ry Schueller
Cryptozoic Entertainment 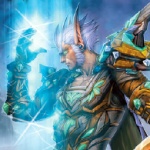 It was rumored that one of the NACC players in the top 100 was dq'd without prize. If this is true, would the invite be passed to 101 place. I came in at 101 place and was wondering. Also, where are the World Qualifying regional events held or how could I find out information on those events?

Qualifications did not pass down at NACC or EUCC.